Reignfall Pt. 2: Words for My Successor

To the man who now wears my studly, satin sash––torture porn director, Eli Roth––I offer the following words of wisdom. You may heed them or you may not, that is your choice. In fact, as Mr. September, no doubt your royal journey will take a much different path––one probably less characterized by swarms of sweaty horror, anime and video game fans all trying to get their pictures taken before their makeup runs into their leotards and their cat tails fall off––but it will be no less rewarding if you meet the many challenges ahead. In an effort to guide you, I will try and share tales of my own experience. In doing so, I can only hope therein lies a studly through-line from which you may tether your wayward soul in times of utter despair. In other words, it’s not easy to be a scary stud for 30-plus days in a row, Eli, so drop the fake blood and pay the fuck attention.

To be fair, my arrival in Toronto proved a welcome reprieve for my constitution. After suffering hours of delays in Philadelphia, the paparazzi was kind enough to maintain a wide berth, allowing me free passage to the sidewalk shuttle station from where I would depart for my hotel. On time at :05 am (as it was posted on the pole), I boarded the swanky forty-some-seater and enjoyed the scenery as we headed towards The Royal York––after a few stops to pick up some other passengers. Luckily, I was not recognized. Way too tired for that shit.

I found The York splendidly elegant, and at that late hour, peaceful. This was most welcome, as I was low on energy from internalizing a blind rage that had yet to fully dissipate. Straight to my room I went and inside of a half hour, I was sound asleep. The difference between how it felt to be in a king-sized bed as opposed to any of the assorted airport chairs was, to say the least, marked. And I would find the majority of Toronto to be very much like that: patient, gentle and kind––the way we all hope our first relationship experience will turn out until we’re ritually stomped in the bollocks and left to die in a puddle of our own sick. I’ll advise you to keep this in mind.

I awoke verily refreshed, and enjoyed an expensive breakfast at a restaurant under the hotel. Downtown Toronto has as much going on below the streets as it does above. And if you manage a breakfast at the buffet I attended, the same could be said for you. Blame it on the fruit, if you like, but that Canadian bacon tasted dodgy. I meant to ask the couple next to me dressed head-to-toe in Star Wars fan gear what they thought, but the male of the species was working on a joke. His female counterpart didn’t seem to speak the same language, or so I took it to be judging from her “bad eggs” facial expression. I couldn’t hear the joke, so I can’t comment on its level of comedy. However, it might have been she was too concerned with sorting our her many medications which I saw laid out in front of her to listen to Bland Solo, and who could blame her? It was no time for frivolity, and I hope for everyone’s sake that he added that lesson to his obviously limited repertoire along with “how to eviscerate a grouchy Ewok with a double-ended light saber”.

Now, please understand that I kid. And I really don’t intend to be unduly harsh on the average genre geek/fan/stalker. After all, I was one of them before I ascended to my knightly station. Or was I? Perhaps that was what I was about to learn. I knew I loved horror, and have always gotten along with others who shared my taste in popular culture. In fact, I find them to be some of the brightest and friendliest people I’ve ever had the pleasure of meeting. But something didn’t feel quite right as I entered the Expo Center and took my place in one of the dozen snaking lines, e-ticket print-out clenched safely in hand. For one, many of them were dressed up like characters that I didn’t recognize. Others donned costumes of a vaguely Star Trekkian nature, and a few, as far as I could tell, meant to impersonate asthma inhalers. What in the HELL was happening to my convention?

Folks, when you buy tickets to an event, be sure you fully comprehend as to what they actually pertain before hitting the “send payment” button. Not that learning the Festival of Fear was actually only one small part of a much larger FAN EXPO that included comics, sci-fi, anime and video gaming would have stopped me from attending, but at least I wouldn’t have entered the building expecting to be greeted by a legion of zombies and found this instead. 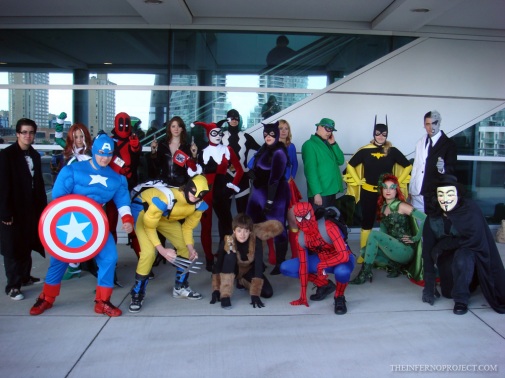 Whoah-ho, there, buckaroonies! Now, I can make out most of these people, but is that “Bar Code Man” back there standing next to “The Mom Jeans Avenger”? It appears Supergirl doesn’t know who they are either, although her face tells me she may very well have just gotten her period. Perhaps she’s eavesdropping on “Leprechaun Hollywood Agent Man’s” conversation with “Bet You Can’t Guess Where I’ve Stuck My Bluetooth Headset Man” all the way on the left. Look, I like superheros just as much as the next 12 year-old, but I still don’t think there was an age in my development when I would have been excited by “Gerbil Boy” down front there. Especially if he was wearing a shoe on his right hand like this one appears to be. Sorry if I’m being mean, but that doesn’t say “super” on any level to me.

Like it or not, I was going to have to share the cavernous space with birds of another feather. And far be it from me to claim superiority over any of them. There’s a danger in doing that. That’s how you slip hopelessly into that place where the idea of making love to a cardboard cutout of Princess Leia in your parent’s basement seems like a dream too far. Nay, there is room for all in the world of fantasy-blurred-reality, and I was prepared to mingle with the hoi-polloi no matter how snug their utility belts.

It took approximately one full hour to navigate the maze that led into the main room, which is a lot of time to wonder if you’re at the right convention. A few kind souls assured me I was, and I remember feeling something akin to “thankful”. Still, not familiar with waiting, I did a fair amount of fidgeting and took a far more than healthy interest in the bride and groom zombies directly in front of me. Not so much because their costumes were elaborate and clearly painful to withstand––although that much was clearly true––but more because they were about nine and ten years old and their un-constumed parents were pimping their pictures out at a rate of seventy per minute. For the first thirty or so I stepped out of line so as not to be the “bored dick in the back”, but then I stopped bothering. A quick look around the Interweb provided not one example of the little darlings, so perhaps mom and dad haven’t gotten http://www.embarrassthefuckoutofmykids.net up and running yet. Therefore, allow, if you will, a dramatization.

I'm the batshit insane woman behind the sign caught in a lame "duck-away".

Imagine the thrill when I learned that the bride’s dress was, in fact, the mother’s actual wedding dress. “What else are you going to do with it?” she shrieked when asked about it by another giddy attendee in the process of capturing her treasures for the ages. Unfortunately, it was at that point that the dress began to fall apart. The safety pin used to fasten the back seemed to lose its hold, and I immediately began to feel sorry for the little girl. It was only 10 am and already there was a wardrobe malfunction. I started hoping her mother was carrying a change of clothes for her, but alas, I saw nothing of the sort. Poor, half-naked, sticky, little blood-streaked girl, I’m thinking, this could put her off the concept of marriage forever. Oh well, at least the cycle would be broken.

Listen, I really don’t mean to be cruel. Honestly, I don’t. To tell you the truth, I wish my mother and father saw it fit to have this much fun with me when I was a mortified fat kid with no friends. Who knows, maybe I just wasn’t fat and friendless enough? I sure am now!

I’m not fat at all, actually. And okaaaay, either were the kids. Much. Shame on me.

Moving on, I finally got into the main room, weaved my way through the throngs of gamers, comic bookers, anime-ers, picture-taker-ers, and found my planet, my people: the Festival of Fear. It was located at the far end by the Magic the Gathering cafeteria table-style competition arena (a facility that would go criminally underused, I’m sorry to say) and there was much horror goodness on display: t-shirts, masks, posters, jewelry, tattoos, memorabilia, Zombie Jesus graphic novels, corsets, better for worsets, and just about anything you or I could imagine. And as expected, the Rue Morgue booth was interesting and filled with lots of cool and helpful people who acted very interested in my questions and comments. I even made a connection with Burning Effigy Press and I hope to work with them soon. To show my appreciation of their enterprise, I shelled out 25 Canadian for a glow-in-the-dark t-shirt which I’m actually wearing right now. As far as I was concerned, phase one of my Studly domination was complete. I was in, the atmosphere as electric as a PS2 dual shock controller, and there were a few special celebrities I was fixing to meet. I’ll save those stories for next time, but to give you a little taste, imagine braving this…

To get to this…

…well, you get the idea. I leave you with a video of the band that featured at the Rue Morgue “Dance of the Deadites” after party, Psychocharger. Before you watch it, let me tell you about the time when my band kicked into the very dramatic beginning of a Halloween gig with hundreds watching only to have the cheap-ass stage banner we were forced to rig together at the very last minute fall directly on top of our drummer. There is no more uncomfortable silence in the universe, I can assure you. Because you see, Eli, sometimes…well, sometimes things just don’t go exactly like you want them to, and then they kind of do and them’s the memories you get. Until next time, Studdites…

2 Responses to Reignfall Pt. 2: Words for My Successor