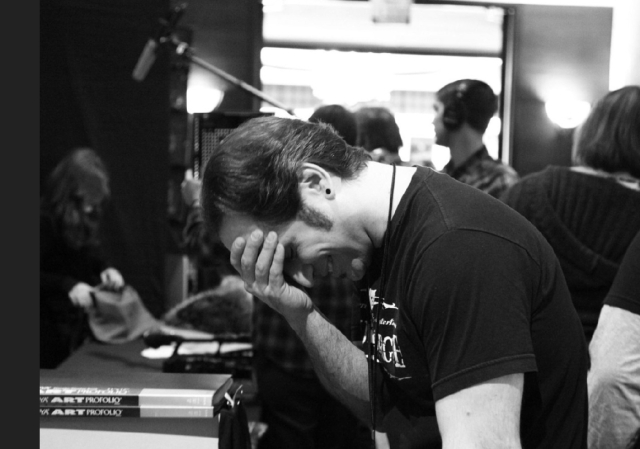 There was a moment during the Monster Mania 17 shoot where I felt the sharp, sharp slap of folly. My stomach knotted and dropped to the floor, and I nearly cracked into the kind of hysterics brought on by the sudden realization that I had miscalculated my risk by too great a distance. The exact moment of which I write is captured forever in the picture you see above. In a way, it was freeing. The jig was up. My tip-toe dance on and around eggshells would finally devolve into a madcap snow angel on the hilariously hideous carpeting.

To be fair, I wouldn’t have been completely surprised. What I was trying to do looked clinically insane to those who hadn’t spent months and months carefully planning it, and I was told as much by one of my very own actors. It actually reaffirmed my faith in her good sense. Going into a live convention unannounced to the public and attempting to shoot a feature film with everyone and everything as my multi-million dollar backdrop is the kind of idea that usually withers into dust whilst nursing the hangover caused by the bender that brought it on. But like so many projects I’ve undertaken, it made perfect sense to me. All I had to do was execute the plan to perfection, which meant directing a crew of almost 40 people for three days to never put a foot wrong lest we be escorted out by the authorities. Easy.

Anyway, the moment in question involves a scene where my main character throws her car keys to a friend on the other side of her vendor table. This friend is in the process of shooting her for his documentary, which meant he had to read his lines from behind the person running the camera. The first take went fine. Said keys hit him square in the chest and he fumbled them to security. The second take, however, saw the keys go over his head and onto the vendor table behind him; a table run by some very nice people who had already spoken with me about blocking their traffic with my sound cart. We’d been there for too long a time, and their angelic patience was quickly running out. When I heard the keys hit, well…I did that.

The folks at Fortress Press, Inc. had woken up very early in the morning and loaded their car full of two $300 tables worth of merchandise and driven to Cherry Hill, NJ from Lemoyne, PA with the only expectation being a possibly challenging task of making back their money in three days of noisy convention atmosphere. Now, they had a friggin’ movie being shot in front of them. We all know how most people react to seeing a camera: they run. One serious complaint to the hotel staff and we were history. So what did they do? They let us do another take, with the assurance it was the last. It was, and we got what we needed.

I’ve written a film about a young woman suffering the awful repercussions of the black underbelly of human nature, and I’d been rewarded by human nature of a very different kind. Sure, I promised Fortress Press, Inc. a mention on the film’s website and in the final credits, but they didn’t have any more assurance that would be good for business than the sudden arrival of some half-decent, weekend weather. I was humbled, and continue to be as I work my way through this somewhat daunting process. The question remains, however, if being rescued by the good graces of others (who, frankly, must have also been intimidated by the notion of shutting us down) will bring us the kind of luck we’ll need to carry us through the production, or help create a monster that will put me in deep emotional and financial debt for the rest of my life.

You can’t turn back after one head slap, can you? We look to shoot again in mid April. And if you would, please check out our blog, Facebook, and Kickstarter page. We could use a little more good nature, and again we promise to give back in kind.